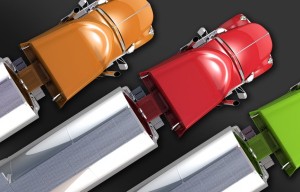 Trucks without speed-limiting technology, on the other hand, won’t be forced to retroactively install the technology.

Installing thousands of new monitoring devices sounds like a major investment, but the Department of Transportation says the cost will be minimal, mainly because the majority of trucks on the road are already equipped.

Industry organizations are split on the proposed rule. The American Trucking Association says it “supports speed limiters and a uniform national speed limit for all vehicles, not just commercial trucks . . . however, federal speed limiter efforts must . . . account for speed differentials and any potential safety risks they can create.”

The Owner-Operator Independent Drivers Association is opposed, noting “there is no clear evidence that supports the use of speed limiters will improve safety. In fact, there is data that states that high-speed related truck crashes are rare events and the reduction of speed and power can have negative effects on safety.”

PMAA has yet to release an official stance on the matter, but are currently working with operational committees for input. Rest assured, we’ll keep you updated in the coming weeks.